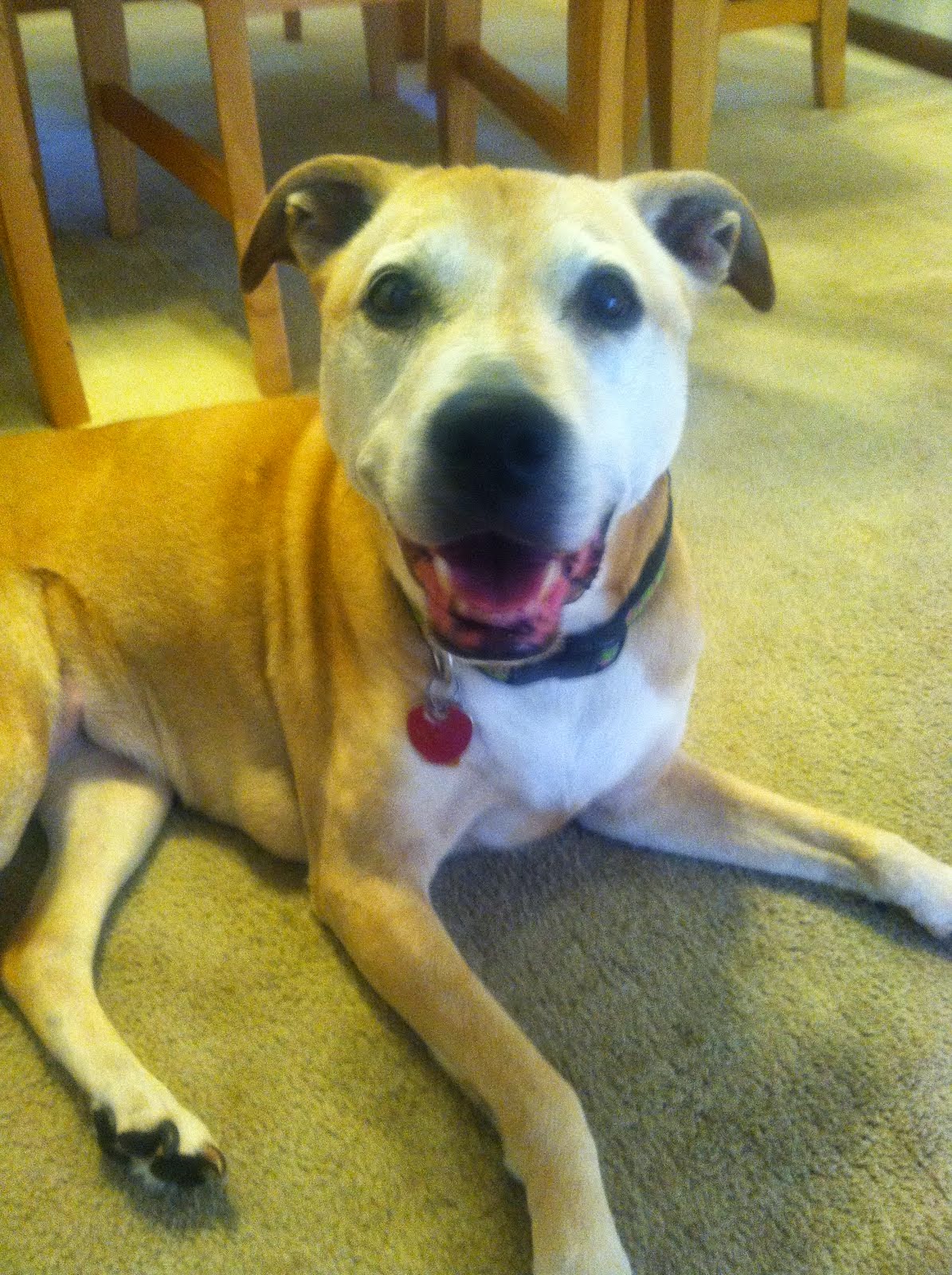 It's been almost a year

When I woke up Halloween morning, I was mostly thinking about the actual day and that J was having a friend over, so we had some cleaning up to do. Then I got on FB, and checked the "On this day" feature, which is great for someone like me, who is very forgetful. Well, on the past few October 31s, I posted pictures of Sadie, because it was her birthday. At least that is when we celebrated it.

I felt sad for not remembering it was Sadie's birthday. And then I felt sadder, knowing she was not with us. I cried for a minute or two. But then I was okay.

This coming Tuesday will mark the one-year anniversary since Sadie has been gone. I can hardly believe it has been that long. Time seems to be going by so quickly anymore.

I am sure I will shed a tear or two that day. I am shedding a few now.

I think it is funny how some people (maybe many) tend to remember the best in things. I recently met some friends for an early dinner. One of my friends dog-sat for Sadie for four days the summer before this one. She asked how Bai was, and I said she was the worst dog ever. And Amy said, "You said the same thing about Sadie." I was surprised. I really did not remember saying that. Sure, at times, I know I did. She did some things that drove me crazy. But to think I regularly said she was the worst dog or that I said that to Amy. I felt bad. But, in a way, good too, knowing that I clearly remember the best about Sadie.

It's been a year since we knew the end was near.

I pretty much stopped blogging about Sadie a week after she died. It was hard to do, and we got adopted a new dog not even a month later. Because I found myself forever comparing Bailey to Sadie (and Sadie wins pretty much every time), I more or less decided that was the end of Sadie's blog. That Jordan got bored with it was also a contributing factor.

But thanks to Facebook's "On This Day" feature, I was reminded that we found out that Sadie had cancer on 9/11. I actually thought it was a different day; 9/11 normally depresses me so much as it is, so I am surprised that sad Sadie day would not have stuck with me. In any event, I felt that I needed to come here to commemorate (for lack of a better word) that day. So here I am.

It seems so hard to believe that it has been over a year since we were given that heart-breaking news. I still think about Sadie a lot. I often wonder if I would think about her as much if we did not have Bailey. Maybe I would think about her more. With pets, at least for me, and maybe just because we have another, time really did help to heal my heart. I still miss Sadie, but I have not cried about her in a long time.

For the first few week after Sadie died, I cried daily. Maybe that even lasted a month or more. But eventually life got in the way and she was pushed further back into my mind. We keep Sadie's box with her ashes, along with two pictures, her collar, a hand-drawn card and picture from my niece, and a book about dogs on a shelf above one of the couches in our living room. Sometimes when I dust that shelf (which is only about once a month), I get sad. Only recently did Bailey start sleeping on that  coach occassionally. Part of me believe that Sadie's ghost has shooed her away.

About a month or two ago, in the later evening, Bri said that Bailey was staring at the wall near the couch, and her tail was wagging. He got up and tried to figure out what she was looking at. He found no toys, no bugs. Nothing. When he told me the story, I right away thought it had to be Sadie. Maybe she was somehow communicating with Bailey and telling her it was okay for her to stay. If Sadie really is/has a ghost, and happens to be a ghost who can hear, then she knows how much we love and miss her and how often I say, "Bailey, Sadie would never do that." or "Sadie was so much better."

I feel a little bad about saying that to Bailey, but I am 99 percent sure she has no idea what I am saying

The hubs found this picture of Sadie in the kid's playroom/study room. I don't remember Sadie ever looking this young, but here she is, after she had been living with us for two months. 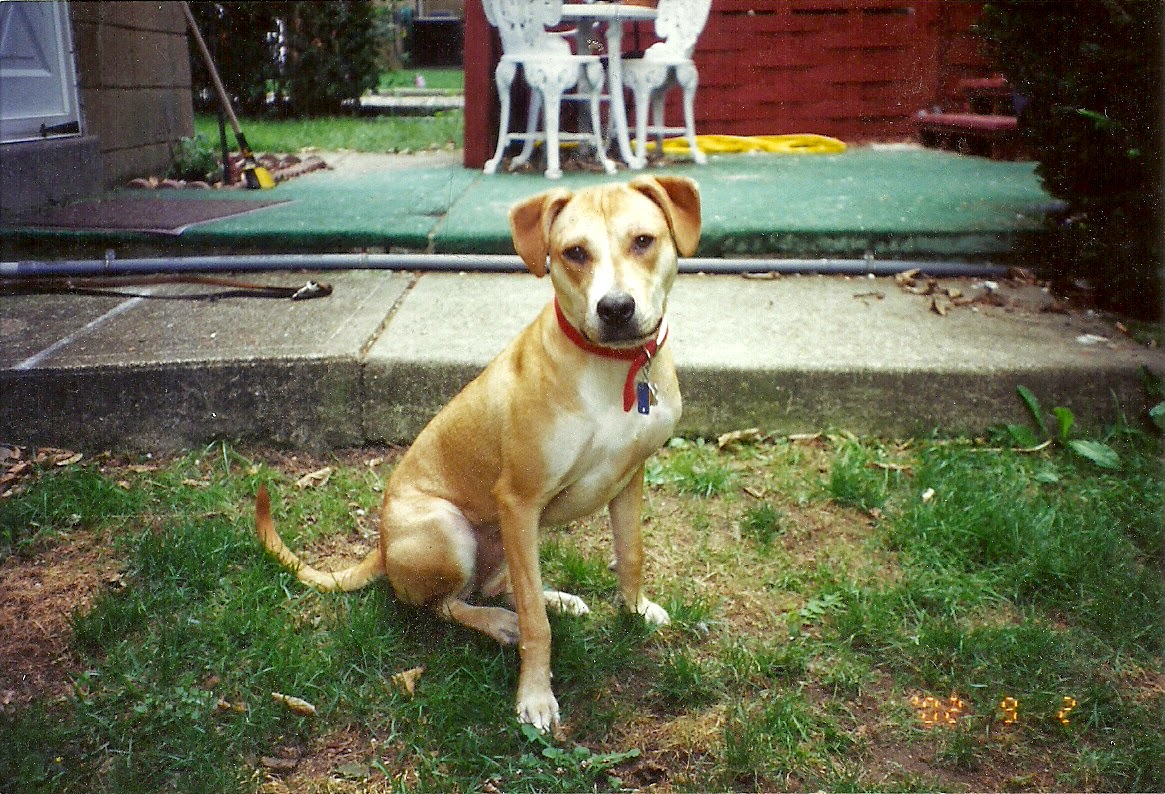 One of my favorite Sadie memories

The house feels kind of empty without her. Empty probably is not the best adjective, though. It is more like something is missing. Something that was such a integral part of our house for 12 years, 4 months, and 10 days.

This morning I was remembering one of my favorite Sadie memories, something I wished I had captured on video, but it would have been nearly impossible to do. One evening, as the hubs and I were watching TV, Sadie was either licking herself like the cat we were convinced she partially was, or else she was scratching at the floor or couch. Although this was very annoying and disgusting, I could usually tolerate it (although I would reprimand her). The hubs, on the other hand, would typically sternly tell her to go.

That particular evening, true to form, the hubs told her to get out of the room. She left, and I felt sorry for her, as I always do when she is scolded (I was not the best pet parent, as I often let Sadie get away with a lot). Not even two minutes later, she was in the doorway (which was about 8 feet away, directly across from where I was sitting), waiting. Then, she slowly lowered her body and very deliberately practically started crawling into the room. I pointed this out to my husband, as he could not see this from where he was sitting. Once she came into his view, still slinking, we both tried not to laugh. She really thought if she lowered her body an inch or two and moved at a snail's pace, the hub would not notice she came back in.

Of course, she kept coming/crawling, and proceeded to sit on the floor next to the chair where the hubs was sitting. Neither of us did anything, because how could you shoo her away after that?
at 5:56 AM No comments:

Sadie, I miss you already.

At just after 6 p.m. this evening, Sadie took her last breath. I was with her until the end, talking gently to her (and crying). I am so glad I was the last face she saw. But it was so very hard.
When it was over, she looked so peaceful. I rubbed her and told her how much I loved her. It was very hard to leave.
I have been home for about an hour and a half, and I can barely stop crying. At one point my chest felt so tight and it was almost hard to breath. I did not think it would be this hard. God bless the kid; she is taking it so much better than I.
The house feels empty and lonely, which I know is not the most sensical thing to say or feel when you have people in it. But that is how I feel.
My heart is broken into a million pieces. I know my Sadie is not suffering anymore. But I sure am without her.
I love you, puppy. I will miss you terribly. 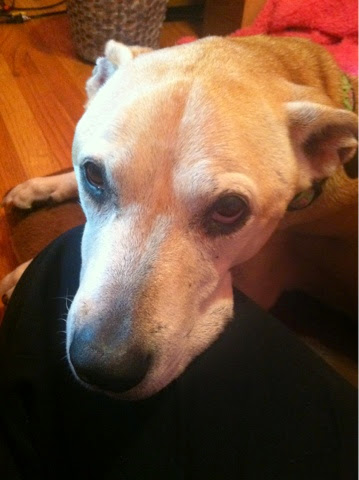 One of the quirks I will miss about Sadie

Sadie was (I keep typing was, but for the next 22.5 hours it is still is) IS the snuggliest dog. Most of the time she likes to lie on people, pillows, and blankets, not always in that order.
Like most dogs, she likes to move herself and things, particularly blankets, around, so she can feel just right. This has resulting in her digging at my comforter, blanket, and sheets on my bed many times. And that has resulted in her ripping a hole in at least four fitted sheets as well as several comforters. Yes, I did learn after the first few ruined pairs, but apparently I have not learned how to keep my door closed.
Despite Sadie's penchant for most things soft, she does this one strange thing: Sometimes when she is lying under the dining room table while we are eating, she will rest her head on the chair leg rail.
It cannot be comfortable, and I don't know why she does it.
That's just our Sadie, I guess. 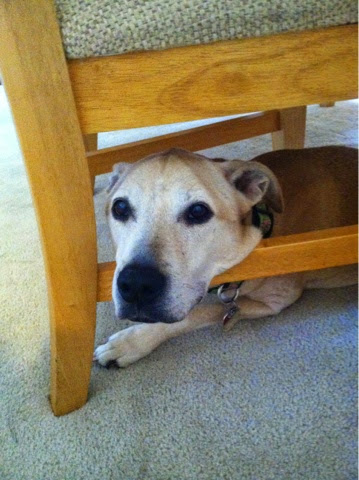 More than just a dog

In 23 hours we will be saying good bye to Sadie. That is less than a day. It is not enough time. But in some ways it has been too much.
Poor Sadie got sick again yesterday. Twice. I am sure most of her is ready.
Last night the kid and I had a sleepover with Sadie in my bed. I doubt I got four hours of sleep; I never went more than 1.5 hours without waking up. I was so concerned she was going to get sick again, that I could not fall asleep.
For quite a few months the oddest sounds have been coming from Sadie's stomach as well as from her rear. Every sound which escaped her body last night  jolted me. Finally around 3:30, I was thinking we were safe. By then Sadie had managed to lie sideways, and the kid was halfway off the bed. So I had to move her, which was not easy because she is quite bony, and I was afraid I would hurt her. Luckily, I moved her via dragging the comforter slightly, and we managed to get a little sleep until the next round of sounds. 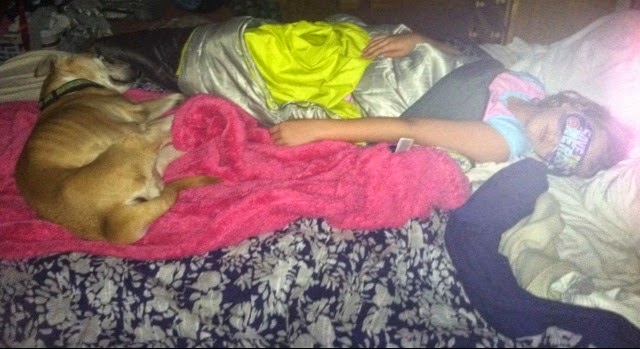 Right now I am sitting with her on her blanket. She has eaten lots of treats today, and has been given lots of hugs, kisses, and snuggles. 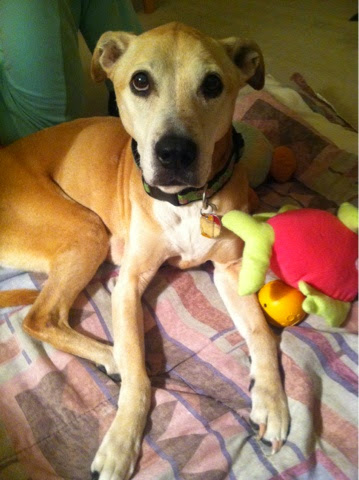 She is so much more than a dog to me. 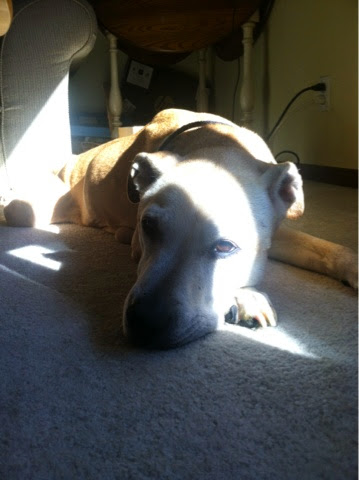